DBV-Technologies – at the forefront of new anti-allergy treatments!

The DBV-technologies.com/en/ internet site is a treasure trove of fascinating information about a radically new method of tackling one of the western world’s most prevalent health problems – allergies. Many avenues have been tried in the battle to treat the symptoms triggered by food and other allergies. These range from injections to sublingual treatments. They all have different drawbacks, so DBV-Technologies set itself the task of finding an alternative. 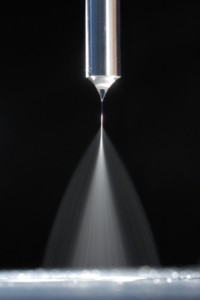 This eventually took the form of the Viaskin® patch, an electrostatically charged adhesive patch that contains minute quantities of the offending allergen. This approach enables the allergen to be delivered to the patient through their skin (into the Langerhans cells, rather than into the blood). This is a much safer technique than that of introducing antigens directly into the bloodstream. One of the key factors in this technique’s success is the electrospray production method illustrated below. This teams up with the special patch backing to deliver an even distribution of the protein layer composing the antigens.

The patch can be used for a number of different allergies, including cows’ milk protein: for more information, see http://www.dbv-technologies.com/en/products/allergy-treatments/viaskin-cows-milk/.

This entry was posted in Autres langues